Judging from the comments of visitors who sent me their photos and impressions of the show, I think it benefited from not having too many pieces hanging in the annual show, as has been the case sometimes in the past. The first place winner Jui-Lien Sanderson’s ‘Afternoon Glow’ also exemplifies the aesthetic that benefits from such a show–the simple, yet very personal view of the artist in depicting a cat in repose.  I was also pleased to see Barbara Sumida’s Moi’ili Loka I’a II gain recognition with 2nd Place in the show. Her work never looks half as good in print as in person with her subtle and beautiful color and brushwork.

Sometimes in group shows, the loudest and biggest paintings get more attention and space than other pieces that are more contemplative or muted. I admire those who work to hang group shows, because it is very difficult, compared to a solo show, where I know as an artist, I can curate to my vision and design the space to my works’ best advantage.

My work tends toward the contemplative, reflective, meditative and serene. I don’t paint Diamond Head with surfers, I don’t paint the ebullient tropical flowers, I don’t do figurative work. All which, for different reasons do catch the eye when paired with a softer, quieter painting. Lighting also plays a very big role in how a painting is perceived and when one ends up in the shadows while another is lit up by the floodlight or skylight, it will have an effect on both and require the visitor and viewer to be more determined to look carefully at each piece. But, to be honest, how many of us do that? So the result is some work gets under appreciated.

The 47th Annual Aloha Show opened on May 23rd at the Honolulu Hale, the City and County of Honolulu’s City Hall. The 47 artists showing 69 works will be on display daily in the main hall and is free to the public.

I have two pieces in the show, one based on my travels in England and the other down memory lane.

Honolulu Hale is a beautiful building. 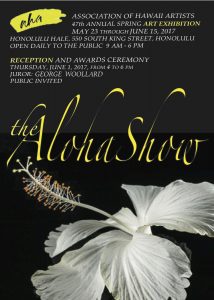 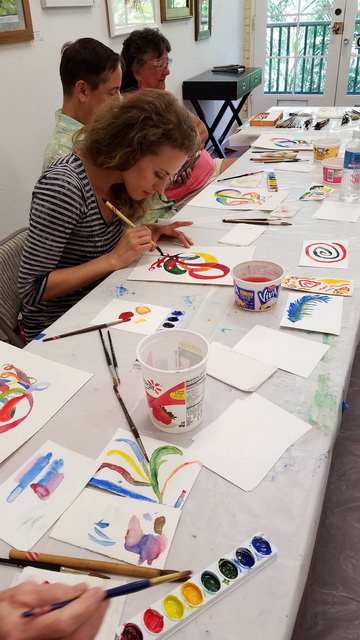 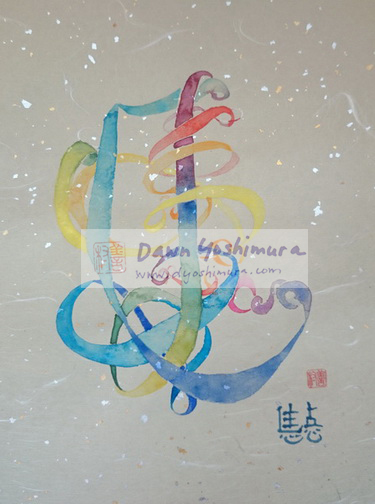 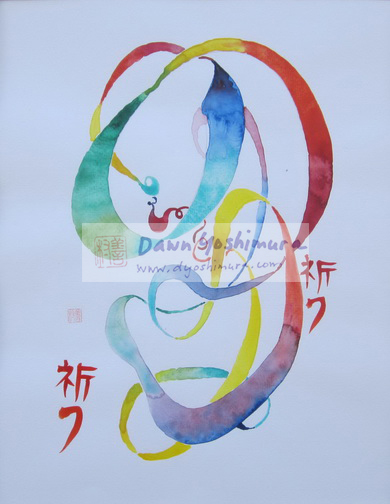 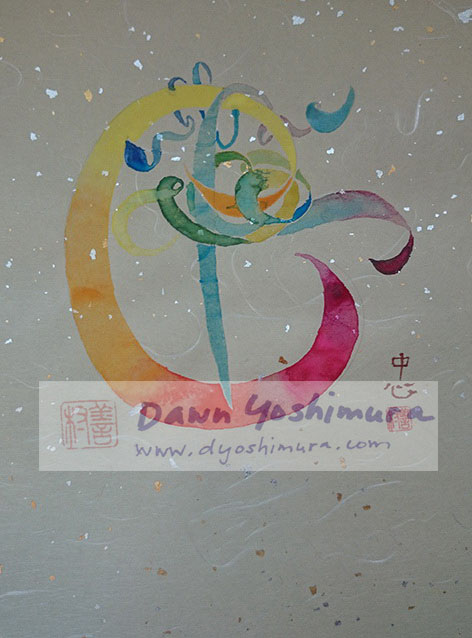 Chuushin Center of Focus
To keep your energy and focus on your goal. Don't get distracted and keep the same emotion of desire. Copyright Dawn Yoshimura 2020 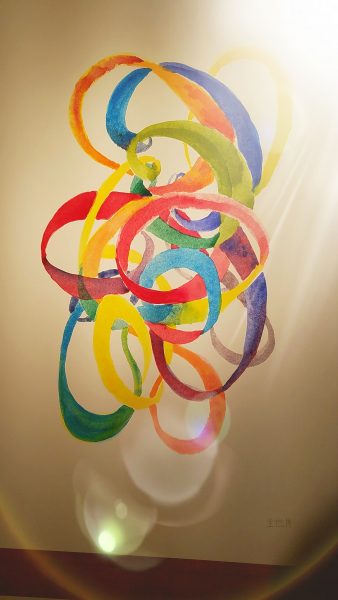 Uchuu: Universe
The cosmos, expanding light is constantly moving, carrying us with it. Copyright Dawn Yoshimura 2020 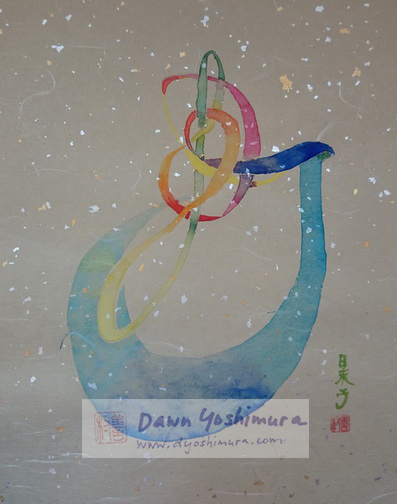 MIKATA My Ally
The person or divinity who is always on your side. Copyright Dawn Yoshimura 2020 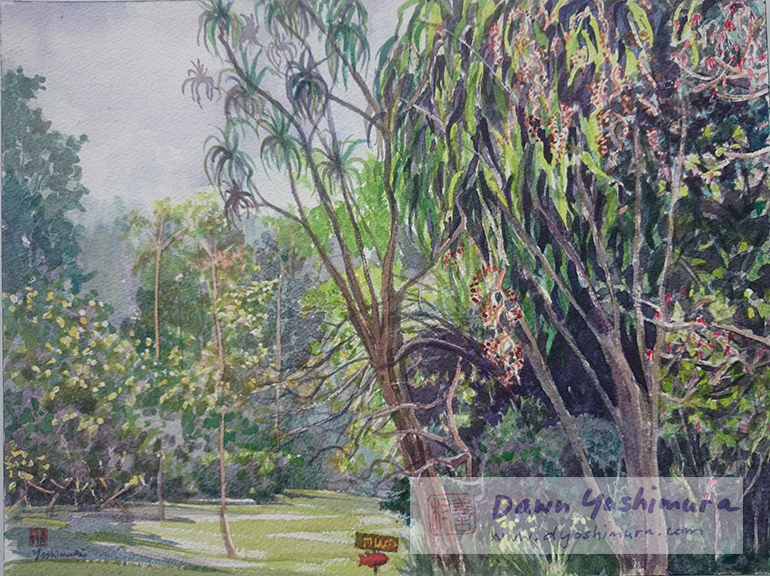 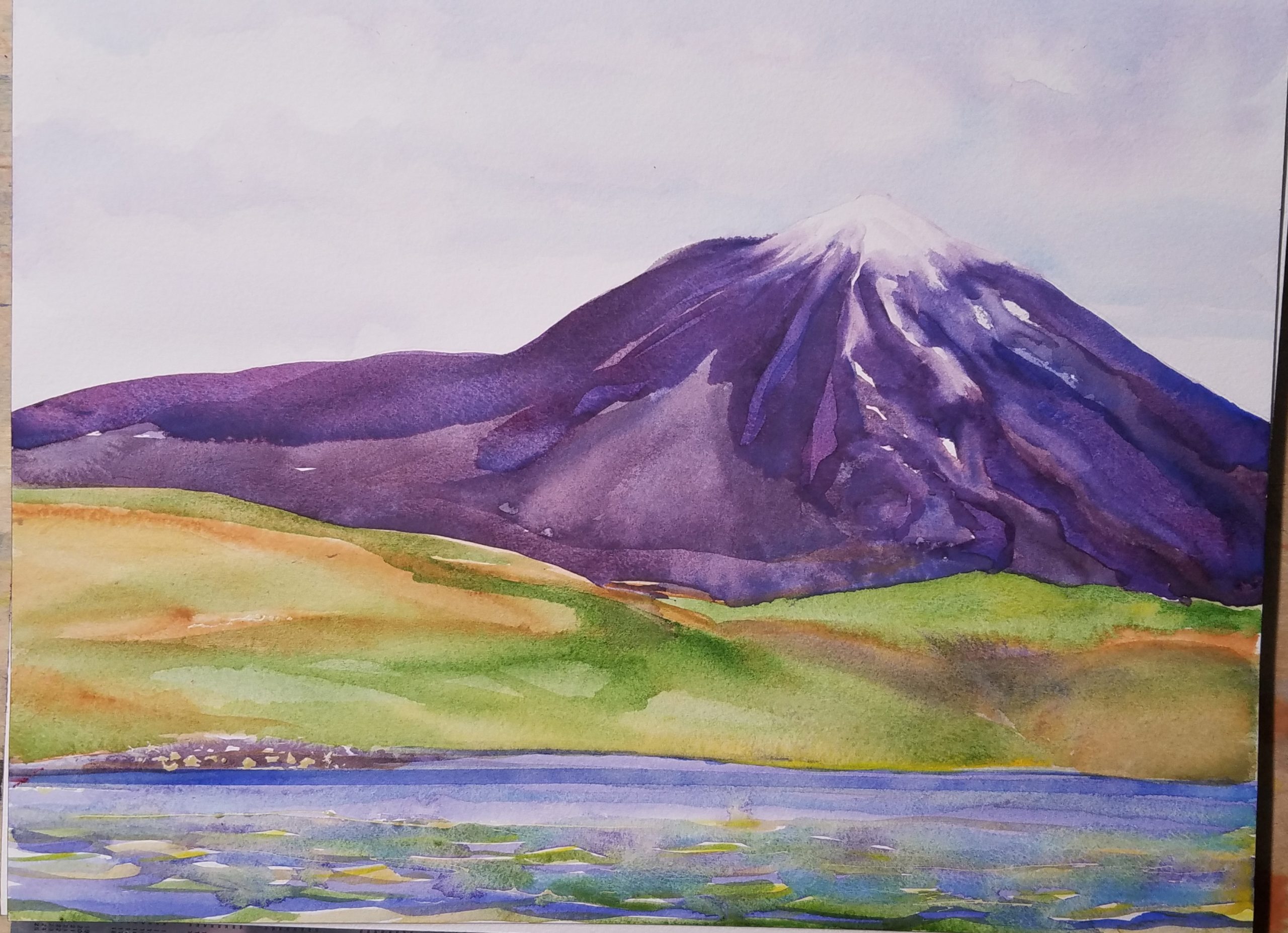 Mauna Kea
Snow capped volcano is a contrast to the tiny village of Hilo below in perpetual sunshine. Copyright Dawn Yoshimura 2020 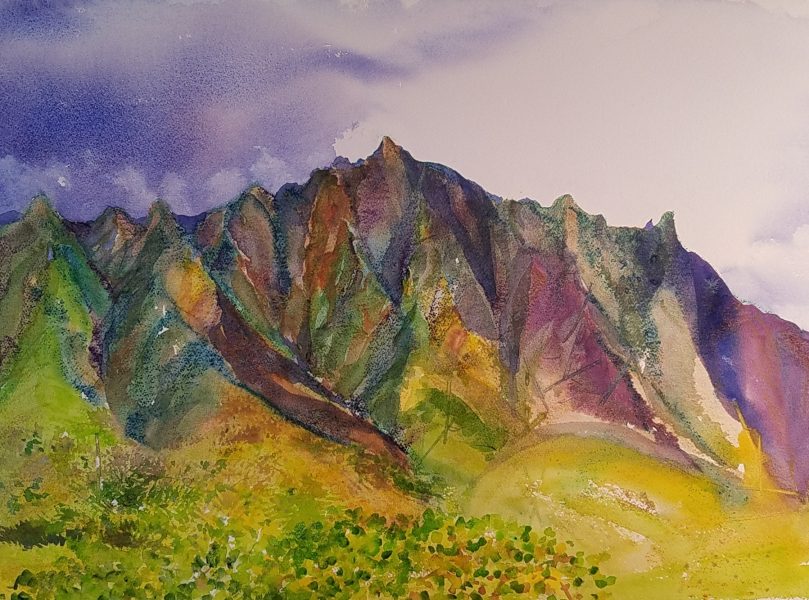 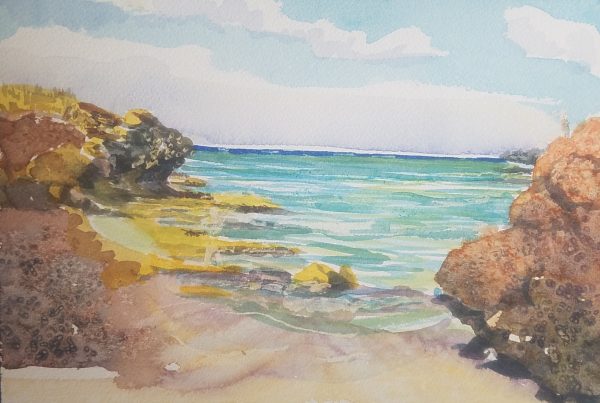 Kula'ila'i
This stretch of coastline is full of lava tubes submerged and above waterline, which makes interesting shapes and sounds and good fishing. Copyright Dawn Yoshimura 2020 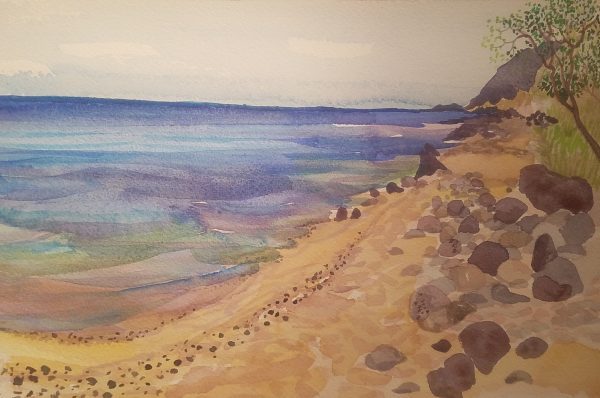 Kukui Lei at Kamalama
The morning brought a lei of kukui upon this neck of the beach. The shape echoed the round water worn lava rocks. Copyright Dawn Yoshimura 2020 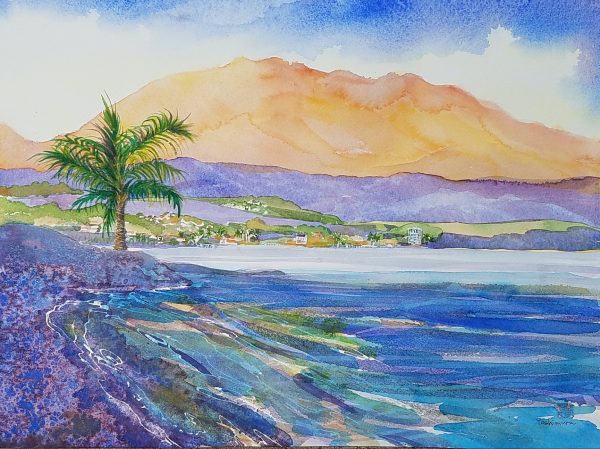 Mauna Kea 2019
The protestors against TMT construction contrasting opinions and points of view are shown in contrasting color and perspectives. Copyright Dawn Yoshimura 2020 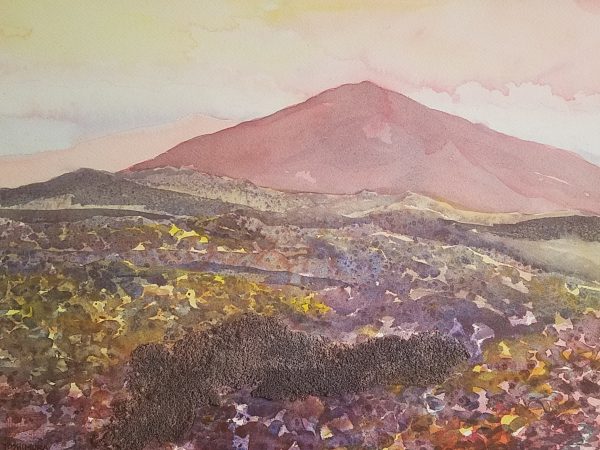 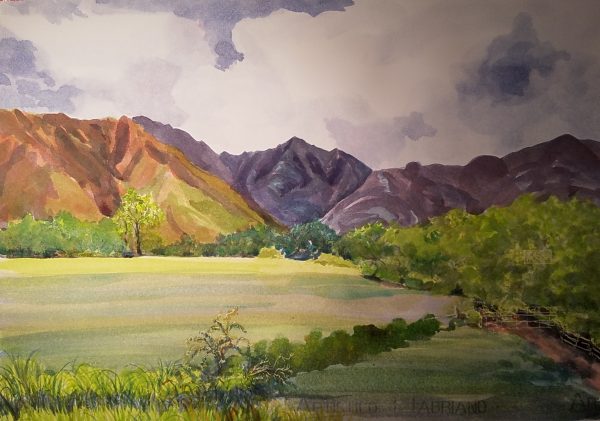 Ohikilolo Ranch
This land is in danger of being sold for development and lost to the families who have been here for generations. Copyright Dawn Yoshimura 2020 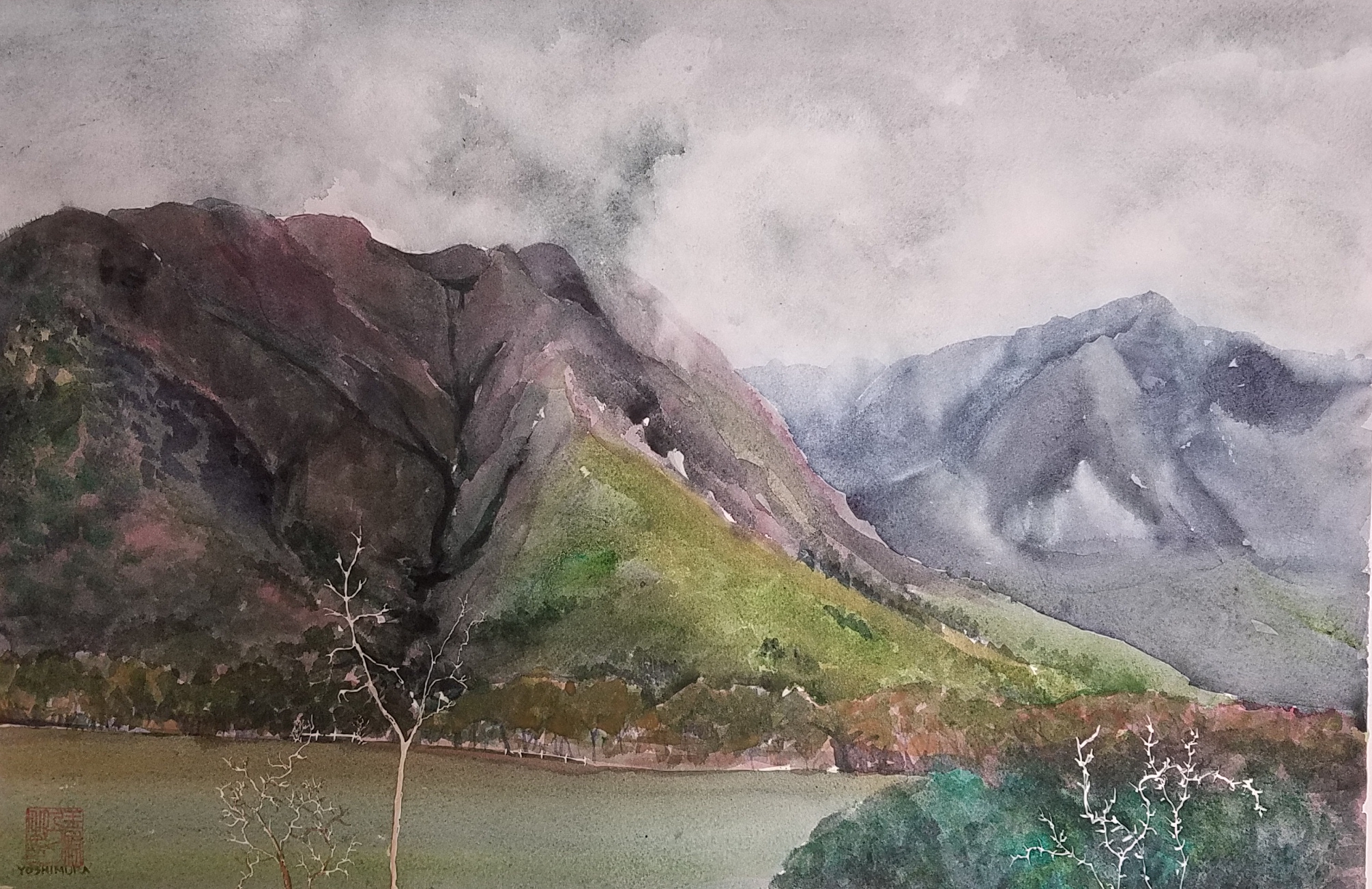 Ohikilolo Ha'a
This site has a light that breathes just at the point of this foothill and entrance to the valley beyond.Copyright Dawn Yoshimura 2020
Straddling Worlds 2020