Keawaʻula is also known as Yokohama, as a surfing spot. That name also has different stories but I prefer to call it Keawaʻula. I donʻt fish, but I like to climb down to the salt pools and inlets along the road and sit and watch the sea, away from the eyes of motorists above. One of its beaches, known as Sex on the Beach, probably a nickname coined in the 90s? is a popular place for spear fishermen and picnicking families. When you get to the end of it and the beginning of the Kaʻena State Park you are nearing Kaʻena Natural Area Reserve. It is also the entry point leading up to the ridge and Kaʻena Point Space Force Station.

During the pandemic, I drove out here to sit in the sun and lie in the salt pools to cool off. The opihi here were gigantic, the coral and limu bright and fully out in bloom in clear salt water. One day as I was sitting at my favorite spot, a fishing boat pulled up. They are dropping anchor when one guy spotted me, he was surprised and alarmed, but our eyes met and an understanding passed. He raised one hand, waist high and palm down, smiled, and started pulling up the anchor. I could see his other partner talking to him, but he never pointed at me, they just continued along and dropped anchor a little further towards Kahanahāʻiki.

My paintings of this area capture the lazy time that passes here. It isnʻt for people in a hurry. In one of the paintings, you see a dad and boy wading in one of the salt pools. Iʻve left out the spearfishermen and boom boxes but you might spot a couple ʻiwa passing through one of the other paintings.

There are many wahipana mauka and up around Space Force. Some are destroyed, some lost, some still known and in use. See Jan Becketʻs photography of this area to get a taste of the richness that is here. 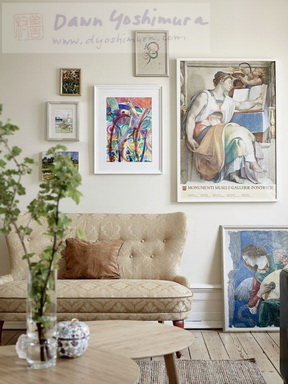 andralangg22_vertCB_13230528_large
Artwork by Dawn Yoshimura
Good Food Good Friends
Using one painting as an 'anchor' and placing them asymmetrically creates a dynamic energizing background to a dining area. The bright colors of MIKATA 'Supporter or Ally' also support good digestion and conversation. 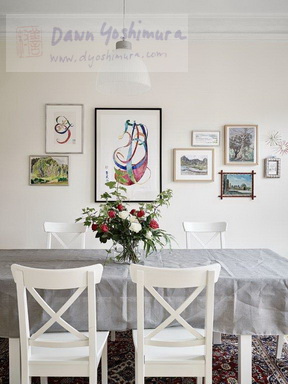 andralangg22_MikataDining_13230356_large
DIning Room w/paintings by Dawn Yoshimura
Regional Flavor
Local architecture with local scenes in artwork create a sense of place. This oil is a plein air piece depicting Tjörn, a well known place of beauty nearby. Regional art can add to the character of a home-reflecting the surroundings outside as well as inside. An artist can interpret a location you identify with and want to bring home. 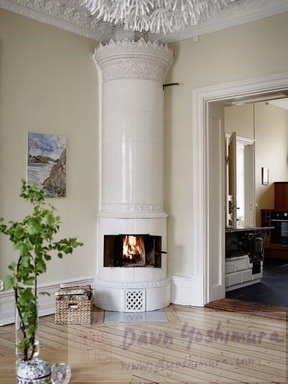 andralangg22_kakelugn_13230033_large
Ceramic furnace 1800s
Bedroom
A neutral calm mid tone wall brings contrast to art. The walls don't have to be white to hang art. Choose themes that bring calmness for a bedroom. Note the paintings are in three asymmetrical groupings. 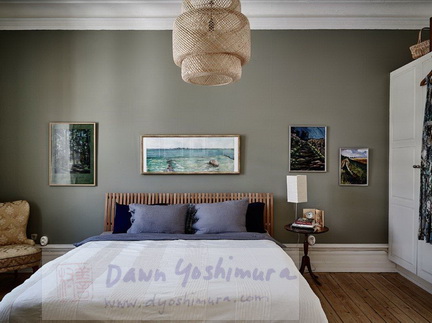 andralangg22_bedroom_13225613_large
BedroomCalm
Artist Corner
Artist Writing DeskAt your writing desk, earthquake putty is a nice way to have flexibility to hang up small drawings and photos.